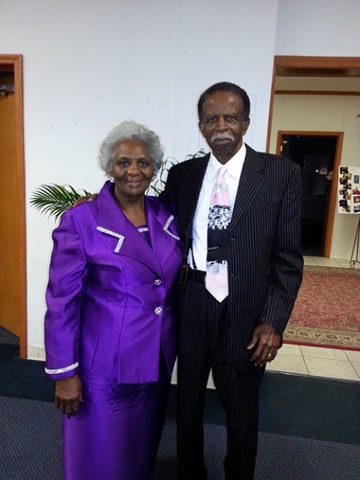 It was at a young age that he was introduced to Christianity. Under his mother’s guidance and instructions he began attending church services at Ebenezer Weselyn Methodist Church. In 1954, Pastor Butler graduated from Caver High School and at the age of 18 he left the comfort and security of the small town, and enlisted with the United States Army. It was during his years in the reserves, that this shy naive and sheltered young man would see and experience first hand, all forms of racial and social injustices. All of which create, preserve, and set a foundation for his future.

Unaware of the call on his life, yet innately familiar with the ways of Christ, he enrolled at the Wyona Bible College, where he began his theological training.

In October of 1957, three years after enlisting, he was discharged from the Army and returned to Delray Beach, Florida. Four months later, on January 20, 1958, he and his high school sweetheart, Emma Jean Weatherspoon were wed. Although still young, the reserves, college and life experiences had matured him and established strong, enduring qualities within him.

It was obvious from the beginning that he and his wife might face many adversities. Both were very young and neither of them was financially secure. Still, they were sure that God had ordained the marriage and it would soon become apparent that God was spiritually and strategically setting Pastor Butler inline for his destiny.

Years later he became a member of the St. Paul A.M.E. Church, in Delray Beach. He began working faithfully, and tirelessly as a lay member within the local body. By 1967, he recognized the call on his life, and in 1970 he was ordained into the office of a Pastor.

Though many challenges and obstacles were to follow, God afforded them many blessings, three of which came in the form of children- Robert Calvin Butler, Theresa Sharlene Denson and Joycelyn Diane Gary. It was both- life and family, independently, that would provide him with hope and promise during his most difficult times.

By the 1980’s, Pastor Butler had served as Shepherd to over 5 churches, and God had again begun to nudge him to answer yet another call- the Divine appointment to establish his own church. And after much prayer and fasting, he heeded to the Lord’s command. Armed with enthusiasm, determination, and carrying no more than faith and a vision, he and 100 people held their first church service at the Wilson Center in Boynton Beach, Florida on March 1984.  Several months later, the NEW CHRISTIAN LIFE CHURCH, INC was birthed.

Known for his dynamic preaching and practical teaching styles, Pastor Butlers’ vibrant illustrated sermons are often powerful, elaborate, humorous, and relevant. He communicates the message of Christ with sincerity and simplicity, stimulating the intellect of people on all levels of life, penetrating the hardest of hearts, and captivating the attention of the restless. Through the years, his sermons on love and compassion, incorporated with the church vision of “Each one, Reach one.” has yielded ministries to the young, old, corporate executives, the homosexual, the disenfranchised, and a host of others.

Having his beginnings in the small town of Delray Beach, Florida, Pastor Richard W. Butler has certainly come full circle. Despite discouragement, disbelief and doubt by others, he has finally made his mark in both ministry and the community. By welcoming people of all races, ethnic backgrounds and financial strata’s, he has made a positive and indelible impression on the community at large. Now, 32 years later, the NEW CHRISTIAN LIFE CHURCH, INC., has plenty to celebrate! It is located in a thriving community, the vibrant home to over 250 members, and one of the fastest growing multiracial, nondenominational churches in the Boynton Beach area.

While integrity, compassion, discipline and self-reliance, are notable qualities in a person, and are certainly traits in which Pastor Butler possesses, he does not attribute them to his success. Instead, he ascribes faith, fortitude and family as being the tools most essential to a secured, successful tomorrow.

Pastor Richard W. Butler is unquestionably a ‘Shepherd among Shepherds,’ and is certainly a gift to the world.

Emma Jean (Weatherspoon) Butler was born in Quincy, Fl. At the age of four, she moved to Delray Beach, Fl. Emma accepted Christ at the age of 12.In the fourth grade she attended Poinciana Elementary School. When Emma reached her ninth grade year she attended the Old Carver High School and later graduated at Carver High School. Emma enrolled into Moody Bible School which was held at South Technical School and Santaluces High School, along with Rhema Bible Correspondence Course. Emma is a faithful member of the Intercessory Team and Missionaries of Christ. Many years later, Emma founded “Anna’s Temple” prayer center in which people can call and receive prayer. Emma believes in (Galatians 2:20) “I am crucified with Christ: nevertheless I live; yet not I, but Christ liveth in me: and the life which I now live in the flesh I live by the faith of the Son of God, who loved me, and gave himself for me.”Her parents are L.C. and Martha Weatherspoon (deceased).She was the only child born to this union. Emma believes in, ”The Power of Prayer,” that if you ask according to God’s will in faith we shall receive it.